Ralph gets fun, friends and pep when he eats the right foods

Poor Ralph.  If he hadn’t eaten that luscious candy bar, he’d have the pep to play with Frank and Judy….and butter is a good source of Vitamin A, but you know, so is a sweet potato or a peach or colored vegetables and fruits (as beta carotene).  Also, breads are enriched, and have been since the ’40s.  A quart of milk!  Now there’s a lobby for ya.  But the prettiest girl in class is still Wendy, the one who eats her vegetables.  Thank goodness Ralph didn’t have that pesky McDonald’s calling him like a siren to the shore…

Posted in food!, how to feed a hungry child

Chocolate Toddler formula: We have officially lost our collective minds.

I am just beside myself about this.  It’s about as sound as a Wacky P 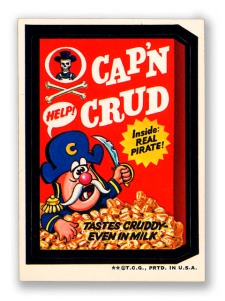 ack.  Chocolate Toddler formula with loads of sugar and cocoa?  Here’s what Mead Johnson, the manufacturer has to say about it in an L.A. Times article:

“The toddlers years can be particularly challenging since food preferences may be erratic and unpredictable,” said Mead Johnson spokesman Chris Perille. “Products such as Enfagrow Premium can play a role in helping children achieve a more balanced, healthy daily diet.”

Children grow erratically in the toddler years, after a year or so of growing at an insanely rapid rate.  Parents tend to panic when their child turns 2 and, after a year of constant eating and small introductions of food, they seem to live on air from time to time.  But no child regularly offered food will starve themselves, and unless they are dangerously underweight (in the fifth percentile or less for weight), they will be fine.

That’s because children are self-regulating at this age — unless you stuff food down their gullet, or introduce them to loads of sugar, which compromises their natural inclinations because of our not-terribly-evolved tendency to pounce on carbohydrates when we find them.  Furthermore, by age two there should be NO FORMULA in a child’s diet.  Children should be consuming foods by this time, and may safely consume milk.

The company rightly suggests that their product is no sweeter than chocolate milk or orange juice.  I would argue that toddlers should NOT be consuming chocolate milk, nor should they be given large amounts of juice (no more than 4 oz. or so) either.  So there.  Children should be given slices of 3-dimensional, whole fruits.

The only real solution for a picky eater is to model good eating behaviors, and offer only healthy choices (giving a child the choice between two items satisfies their craving for autonomy).  What YOU do matters.  Save the pie-eating (Mcdonald’s-eating/Chocolate-eating/you get the picture) contest for naptime.  But at some point, realize that the jig will be up and the next time you should be eating chips, beer and Reese’s Peanut Butter cups for dinner is (never, but) when your children leave for college.  And then you’ll be too old for that sort of thing, so get with it now: MyPyramid.gov for you, and for advice about your children’s eating patterns.

And people, please consider packing healthy snacks for your kid at school and not dropping them off at preschool with a large pancake/hashbrown breakfast in a bag from McDonald’s.

Enfagrow, as my child used to say so eloquently as a toddler: Go away of you!

<Swinging my leg over>  Ah, there.  I have officially climbed off my high horse.

During one of those discussions that makes me sound like my life’s mission is to suck the joy out of a room, I was reminding my students that when baking with eggs, it’s not a good idea to lick the beaters.  The risk of Salmonella from the uncooked dough is high enough to just wait out the 20 minutes while the cookies bake in the oven (and before you even suggest it, cookie dough in ice cream is actually a cooked substance of some kind).  Or, I suggested, there’s always vegan baking.

And there was a bit of interest.  And so, students of Spring 2010, this by no means expansive post is for you:

Vegans leave out the eggs and butter and milk (along with the animals and leather and honey).  I’m all for it, even though I’m a vegetarian.  I don’t like butter — it never comes off of your hands, so what kind of job is doing with your insides? — and I can’t be expected to remember to buy eggs all of the time.  That’s how I got started with vegan baking (and, it’s a challenge), and now I just prefer stuff baked this way because it’s as good or better tasting than regular bakery.  Unless it’s made badly, in which case it’s really awful.  And don’t kid yourself into thinking this is health food, even though overall it’s quite a bit lower in saturated fat and cholesterol.

Before the jump, here are some cookbooks I recommend to get you started:

Isa Chandra Moskowitz and Terry Hope Romero, Vegan Cookies Invade Your Cookie Jar (or Vegan Cupcakes Take Over The World, or Veganomicon, or PPK.com for great advice and recipes)

Posted in Dessert! There must be dessert!, food!